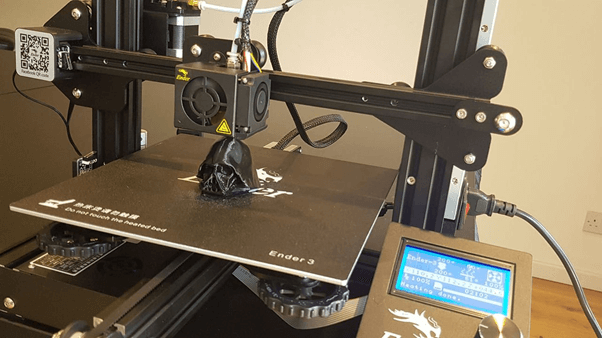 So, you are on the market for a new 3D printer, and you have narrowed your choice to two of Creality’s 3D printers – the Ender 3 and Ender 5. However, you can’t make your mind which one to buy. Here we will compare the main features of the two 3D printers so that it will be easier to decide which one to choose.

But before we start looking at their main differences, we should take some time and consider their common features:

So it’s more than obvious they share a lot of common features. Now the question is, why should we pay from $50 to $100 for the Ender 5, and why not stick with the cheaper Ender 3?

Well, to get there, we also need to explain the differences between the two 3D printers. Here it is, Ender 3 VS Ender 5 – their main differences.

Differences between Ender 3 and Ender 5

The Ender 5 comes with a Creality MK 10 hot end, while the Ender 3 features Creality MK 8.

One of the biggest drawbacks of Ender 5 is that it doesn’t have any thermal runaway protection. The issue has been solved with the newer Ender 3s model in which the protection can stop the machine in less than 20 seconds after an issue with the temperature is noticed.

Ender 3 comes with a generic power supply, which is somewhat of a fire risk, while Ender 5 has a certified Meanwell power supply.

In a head to head comparison, Ender 5 is the clear winner as it can provide bigger prints, offers a better power supply, and much faster assembly. The print quality is also increased.

On the other hand, Ender 3 has better firmware and a lower price point. Then there is the fact that Ender 3 has the support of a massive community from all over the world. So, if you ever got stuck with something, there is an army of people that can help you out.

So, if you are searching for a reliable machine that can be easily put to work, Ender 5 should be your choice. But if you are into tinkering, then you should go for the Ender 3.

Why Manufacturer Should Shift to Digital Transformation

Press Brake Manufacturers- How to choose the most reliable one

The Chocolate Machine Is The Kitchiest Kitchen Accessory...

Bottle Sealing Machine: What It Does and How...

Why is the Automobile Industry Considered an Oligopoly?

The Standard Components Of A Hydraulic Forming System

Characteristics Of Brass That Make Great For Hot...

How Are PCBs be Used in Various Applications?

The Most Efficient Drawing Press Machine For You

4 Sectors Where Flexographic Printing Can Be Used