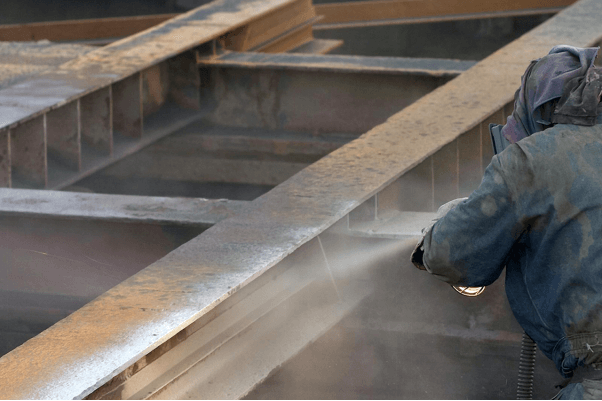 If you are like most folks, then you probably don’t know the difference between shot blasting and sandblasting. Even though these are two similar terms, they are different process whose goal is the same – to treat metal surfaces.

What separates the two processes is the treatment media. Sandblasting relies on compressed air to shoot sand against the surface, whereas shot blasting uses centrifugal force to shoot some other type of abrasive media over the surface.

Nowadays, sandblasting is declining as a surface treatment process because sand has certain properties that complicate the process. On the other hand, shot blasting uses abrasive media that is easier to handle. That includes various metals, plastics, glass, and various minerals. Sometimes, shot blasting uses organic materials such as walnut shells and cobs.

To have a better overview of the two processes we need to analyze them separately.

Generally speaking, sandblasting is a somewhat less invasive and smoother abrasion process. But then again, that is determined by the intensity of the compressed air pressure, as well as the characteristics of the abrasive media.

Because the process of sandblasting is smoother, and if softer media are used, it is possible to treat very sensitive surfaces. That way, the risk of accidental damage is significantly lower.

That makes sandblasting ideal for treating connectors and various electronic fixtures. In terms of media options aluminum oxide is a popular option as it can cut through almost any surface contamination while at the same time preserving the integrity of the undersurface. On the other hand, silicon carbide media is a popular option when more abrasion is needed.

Shotblasting is best suitable when it is needed to treat heavy and thick surfaces such as truck hubs and metal hulls. Sometimes sandblasting takes too much time and is too gentle. That’s when shot blasting comes to save the day and treat whatever surface stands on its way, regardless of how dense or contaminated it is.

There is no wrong or right choice as it is the character of the job that determines which method will be best suitable. The best answer is to leave it to the finishing experts.

But, generally speaking, sandblasting is ideal for smaller, more delicate surfaces in which speed is a major requirement. Then there is the economical angle in which for smaller projects, sandblasting tends to be the more affordable option.

How Useful Is CNC Aluminum Machining?

What Is Tesamorelin and What Is It Used for?

What Are The Hot Forging Machine Types Here?

Here’s what you should know about CNC milling

The Complete Guide to CNC Turning

All About the Fidelity of a Prototype